Home > About Massey > News > Passion for birdsong carries throughout the years

Passion for birdsong carries throughout the years Dr Michelle Roper graduates with a PhD for her work with the bellbird.

Along with 1400 other students over the week, Dr Roper crossed the stage yesterday at the Bruce Mason Centre in Takapuna, in the first of Massey’s graduation events for 2019.

In 2006, Dr Roper began her Bachelor of Science, majoring in zoology and physiology. In this time, Dr Roper says she developed an interest in birds and their songs.

“Birds are fascinating to me as they vary in all sorts of shapes, colours and behaviours. They are very charismatic, which is why I think so many people enjoy simply watching and listening to them. Listening to their song makes me smile and feel very connected to nature. However, when you start to think about why they sing, many questions arise at how such beautiful song can have a very different meaning to the birds themselves.”

She followed her interest into a master's degree with Professor Dianne Brunton, who works in the area of native birdsong in the southern hemisphere, about which little is known in comparison to the northern hemisphere. The pair began looking at resource partitioning between two competitive species, the hihi (Notiomystis cincta) and New Zealand bellbird (Anthornis melanura), during the non-breeding season on Tiritiri Matangi Island in the Hauraki Gulf.

The project formed the bulk of Dr Roper’s masters’ project, which she completed in 2012. Working on this project began her interest in the sexually distinct and complex songs of New Zealand bellbirds.

“We aimed to shed light on how female song fits within the male songbird literature. For example, I have found female New Zealand bellbirds develop their sexually unique songs within a similar timeframe to males, but how the structure of their song develops differs. My research also looked at how the structure of the song of this species differs between the sexes over time, as well as how their vocal organ structure differs to the relatively few species studied so far. This work aims to reveal how sexual variation in birdsong may evolve under different selection pressures and whether the structure of the vocal organ may limit the diversification of their songs.”

She revealed important insights into how female bellbirds develop and change their song over time. Along with her findings on the bellbird’s vocal organ and breeding biology, her research provides an important basis for understanding the function and evolution of birdsong. 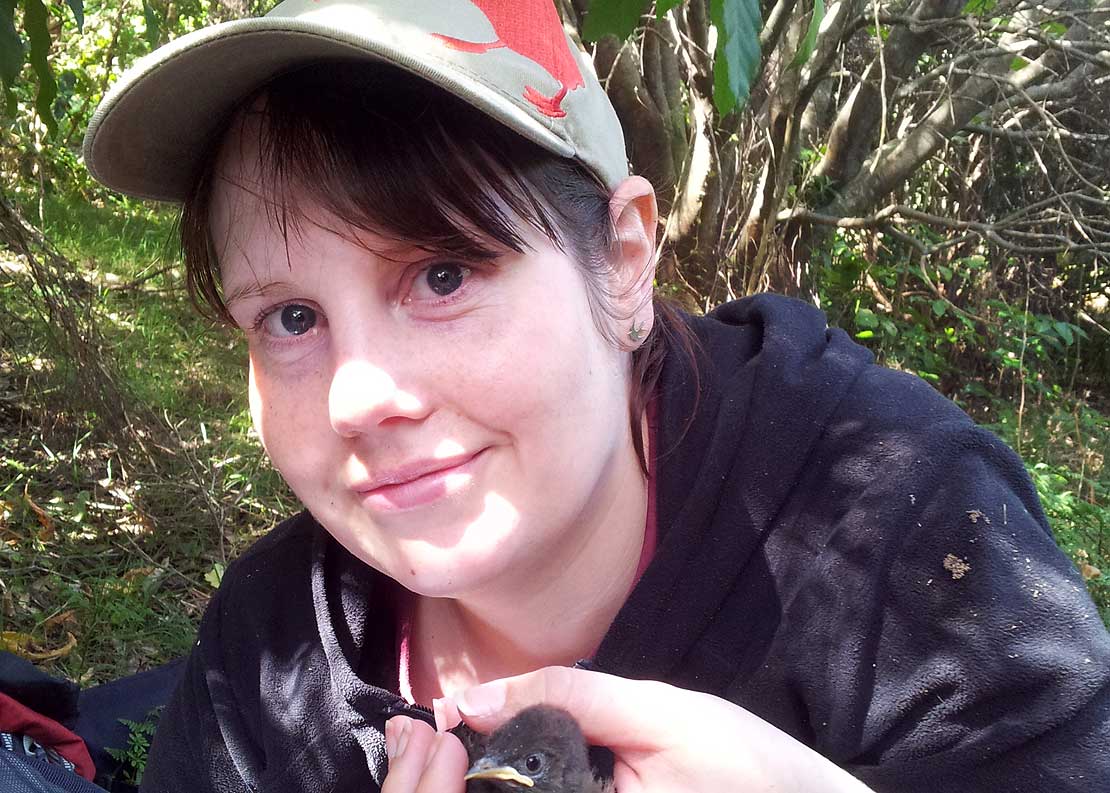 Dr Roper in the field.

“Studying at Massey University for 13 years has allowed me to meet many students, as well as other researchers, with a similar passion for animal behaviour. I have been very lucky to have developed a great relationship with my supervisors, as they have supported me in more ways than I thought possible. It has been great to make friends with fellow students and help each other with our research. In our time off, we enjoy birding together and talking about the natural world.”

She is currently a research fellow at Massey. Her future research aims to continue exploring the relationship between animal behaviour and life history traits, with a focus on animal communication.

“I will continue researching female birdsong and explore the evolutionary mechanisms driving the diversification of birdsong. Birdsong is not only diverse between species, but also between sexes. Why differences in sexual dimorphism in song occurs between species is a question I intend to study using phylogenetic comparative analyses based on a variety of life history, ecological and morphological traits (including the syrinx, brain and hormones).”