Home > About Massey > News > Living in her father’s shadow

Living in her father’s shadow Kurara: The Dazzling Life of Hokusai’s Daughter (2017) will screen at Massey University’s Auckland campus at Albany on Wednesday May 1. 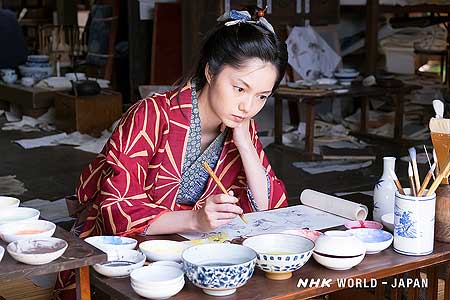 A scene from the biopic film about the daughter of famed
master painter Katsushika Hokusai.

Kurara: The Dazzling Life of Hokusai’s Daughter is the biopic story of O-Ei – the daughter of Edo period (1603 – 1868) master painter Katsushika Hokusai.

O-Ei had always been captivated by painting,  and after a failed marriage, returns to her family home and begins assisting her father, working by his side as he completes his iconic "Thirty-six Views of Mount Fuji" series.

When he grows too old to wield his brush freely, O-Ei becomes his ‘brush’ and paints on his behalf. It is during this time she starts to grow a strong fascination with colours and finally develops her own painting style.

Kurara: The Dazzling Life of Hokusai’s Daughter (2017) will screen at Massey University’s Auckland campus at Albany on Wednesday May 1. The monthly Japanese films play on the first Wednesday of the month, at 6.30pm. Preceding the main feature is a short documentary on life and culture in Japan, which starts at 6.15pm. Unless specified, the films are screened in the Sir Neil Waters lecture theatre in room SNW100. There is free parking available on campus.

For more information on the Japanese films visit the Consulate-General of Japan in Auckland website here.